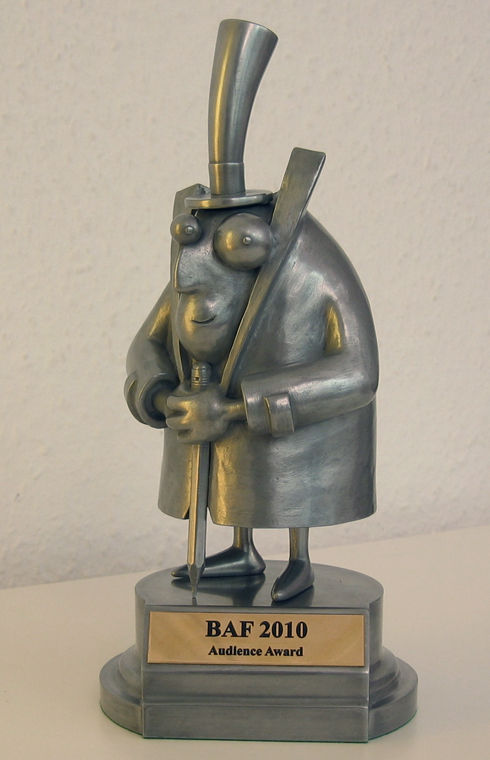 We take our hat off to salute “The Little Boy and the Beast” for winning three times at festivals in November: The short was given the Audience Awards at Bradford as well as at the kuki 3rd International Short Film Festival for Children and Youth in Berlin, and it was awarded as Best Short Film at the Festival Internacional de Animación Expotoons in Argentinia. In December, the Beast was awarded as the Best Animation Film at the Filmschau Baden-Württemberg. Yippee!

Here’s a fun piece of preproduction (for Gruffalo completists): Before they started working on the music for “The Gruffalo” Jakob sent composer René Aubry drawings detailing how he imagined the music would span the film.  A blithely un-musical piece of music writing, but quite close to how the different themes worked in the end. Below this, a repost from June 2010: René at his 30 year stage-anniversary concert at Peter Brooks’ legendary “Bouffes du Nord”, playing a sweet version of what he made of the green bar in Jakob’s drawing, the film’s “Mouse Theme”. 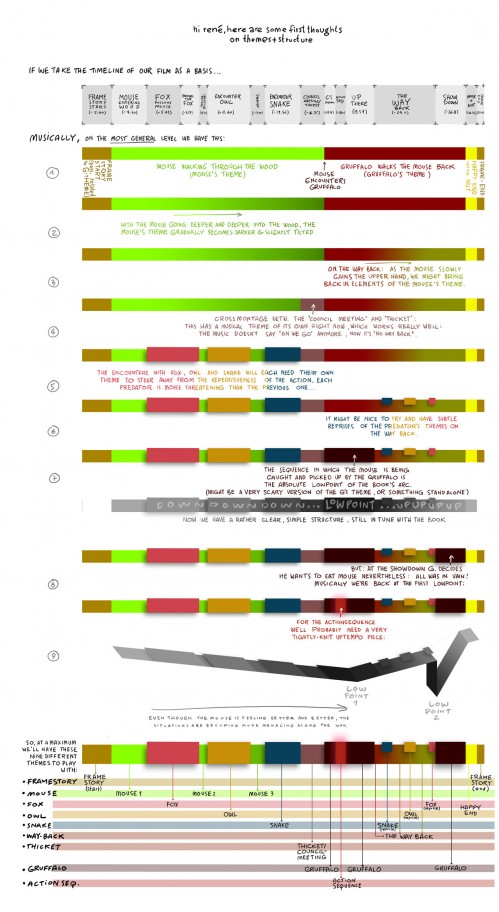 A comparison between Max Lang’s fine work on the storyboards for the Snake Sequence and, below, the final product. More from that sequence here. 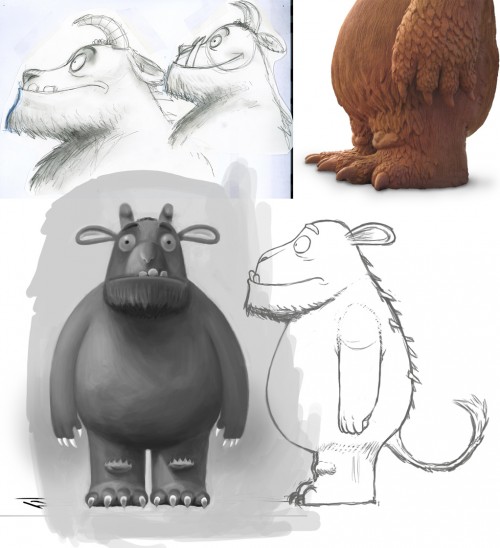 Above: Max Lang’s initial turnaround, which first gave the Gruffalo (drawn exclusively from a side view in the childrens’ book) a threedimensional treatment. Below: Early preliminary sketches and a modelsheet based on Max’s turn-around, both by Jakob Schuh. Maquette by Klaus Morschheuser. See “The Gruffalo” on Dec. 24th, 10.40 am on ZDF. 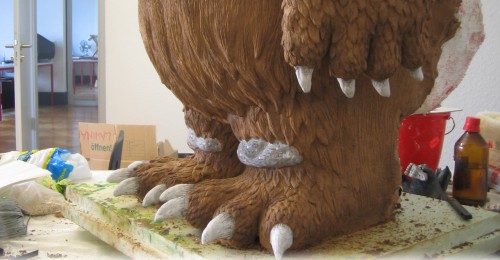 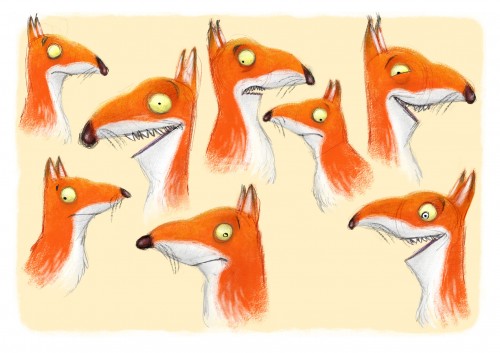 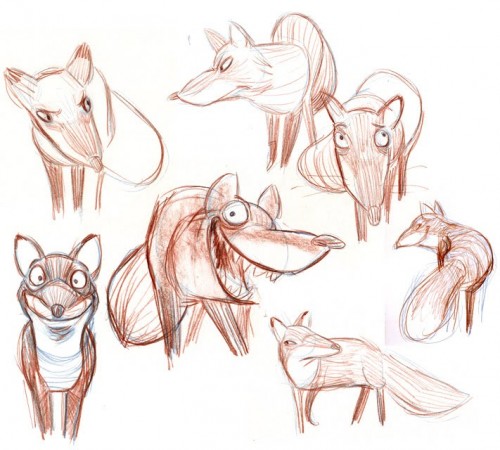 Fox – preliminary sketches by Jakob Schuh (above) characterdesigns by Uwe Heidschoetter (below). See more from that sequence here and here.

We recently completed our über-lovely German version of Magic Light Pictures/Studio Soi’s Christmas Special. To celebrate the Umlaut we share a piece of the film’s preproduction each day until you can watch “Der Grüffelo” on ZDF, December 24 th at 10.40 in the morning.

We’re delighted to hear that Studio Soi’s “The Little Boy and The Beast” continues to find friends whereever it goes. The film, directed by Johannes Weiland and Uwe Heidschoetter, has recently been awarded the Grand Prix at the “Animated Encounters” festival in Bristol. Thank you, Bristol!

We are delighted to hear that “The Gruffalo” was awarded at this year’s Ottawa International Animation Festival as the 2010 Best Television Made for Children. Once again many thanks to the team with directors Jakob Schuh and Max Lang. Besides that, “The Gruffalo” has also won the CIFEJ-Prize at the Biennial of Animation in Bratislava where “The Little Boy and the Beast” was awarded with the UNICEF-Prize. Uwe Heidschötter’s and Johannes Weiland’s short “The Little Boy and the Beast” has also received the Award for the Best Short Film in the Minmest section of the Anim’est Festival in Romania. Many thanks to the juries!

Soi’s director Michael Sieber just has produced the follow-up ad for the Maggi campaign. Leading in and out of Germany’s classic daily soup “Marienhof” a family of spoons gets overexcited. 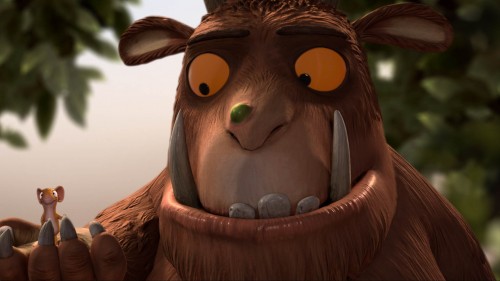 So, if you want to see one of our films there a quite a few screenings coming up:

“The Little Boy and The Beast”  will be screened in Seoul at the Seoul International Family Film Festival that takes place from 27th October to the 2nd of November 2010.

And in December, again in Seoul, at SIGGRAPH Asia 2010 (held from December 15 to 18) there will be a screening of our film “The Gruffalo”, as well as another screening of “The Little Boy and The Beast”.

“The Little Boy and The Beast” is also shown at DOK Leipzig (October 18th to 24th).

The Chicago Children’s Festival will be screening our half hour special “The Gruffalo” as well as the short film “The Little Boy and The Beast” in the time from October 22th to the 31st.

Almost at the same time but further north: The Canadian premier of “The Gruffalo” will be at the Animationfestival in Ottawa (October 20th to 24th).

If you’re in Bristol for the Animated Encounters Festival from November, 16th to the 21st you will be able to watch “The Little Boy and The Beast”.

We just received wonderful news from Sapporo:
“The Little Boy and The Beast” was awarded for the Best Children Short and the half hour special we did with Magic Light pictures for the BBC “The Gruffalo” received the Best Children Choice Award Silver!

We are extremely honoured and happy for both the awards and would like to give our thanks to the festival and the juries.

Unfortunately, we hadn’t got the chance to attend this year’s Animadrid Festival. We thank the jury for awarding “The Little Boy and the Beast” as the Mejor Cortometraje Infantil.

Our short “The Little Boy and the Beast” was also awarded at the KROK Festival as the Best Film for Children and received a Special Distinction in the Short Film Competition at CICDAF in China. In Amsterdam at the KLIK Festival the short got an honourable mention, it was runner up at the Erich-Kästner-Award in Berlin.

The next chance to see “The Little Boy and the Beast” will be this Sunday. The broadcaster KIKA will show “The Beast” on September, 26th at 08.55 as well as on Monday, 27th at 09.25 am as part of the preschool TV-show “Siebenstein”.