To celebrate the 50th birthday of “Sendung mit der Maus” broadcaster WDR is going to air a selection of films that represent the last decade. Two of studio soi’s shorts have made the cut: One episode of Trude’s Flatmate from 2013 where Tier nicks an excavator from a construction site. The other one is “Swipe Swipe”, a music clip  from 2019. You can watch both on Sunday, March, 7th at 8:30 am on DAS ERSTE. The Trude episode is also available in our youtube playlist.

Last year we finished our 26th episode of “Trudes Tier”. A full chapter came to an end. But since Trude and her flatmate still seem to have much going on, Marcus Sauermann is already writing about their new adventures. Looks like they’re up to a trip to the countryside next. If you are in Germany, all recent episodes can be watched on ARD mediathek as well as on Amazon Prime. For more information on Trude and her flatmate check our webpage. We’ll let you know once the new episodes air.

The traditional lantern processions this year will have to be a bit smaller. But even if it’s  just you and your family: a walk in the dark can still be quite exciting. Or what about baking the traditional gingerbread man? As long as you manage to share it with your family members.
This Sunday you can watch the episode, where Tier, Trude and their guest have their own experience of how to celebrate St. Martin.The episode will be shown in “Sendung mit der Maus” on das Erste and KiKa.

This year a lot of film festivals had to be canceled. That also seemed to apply to Germany’s biggest children’s film festival The Golden Sparrow. A cancellation would have been especially sad for us since three of our films got selected. But thanks to their festival team the bird will finally twitter in the golden summer of Erfurt and Gera 2020 from September 20th to 26th! If you want to watch “Swipe, Swipe”, “Trude’s Flatmate” and “Rasmus Klump” on the big screen find out more on the Golden Sparrow’s website.

Stuttgart’s Animation festival will happen online this year. The festival takes place from the 5th to the 10th of May. We are thrilled that two  of our productions are part of the program. The episode “Not Healthy” of our TV-series Boots and Paws and the episode “Klickhit” of Trude’s Flatmate will be streamed. You can get your tickets here if you are up for it!

For the beginning of the New Year Trude is posting videos on healthy body posture. Her flatmate Tier makes sure these videos get spiced up a bit. Watch the new episode “Klickhit” on Das Erste and Kika this Sunday as part of the show “Sendung mit der Maus” or online, if you are in Germany. 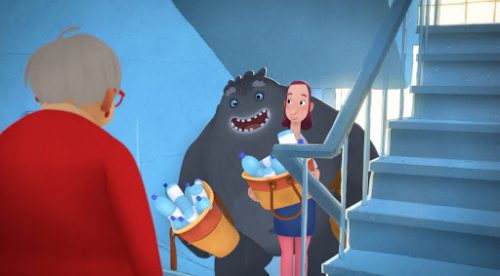 Our brand new episodes of “Trudes Tier” are now also airing as part of “Sendung mit der Maus”. Starting this Sunday with the episode “Sitz”, which will be aired 09:30 a.m. on ARD and at 11:30 a.m. on Kika.
The new neighbor confuses Trude’s flatmate with a dog and enjoys petting him a bit too much. He is not a fan of that behaviour and needs to be very inventive to avoid passing by her door.
From within Germany you can also watch the episode online.


Traditionally on November 11th, children in Germany go for a nightwalk with their homemade lanterns. Trude’s flatmate Tier has some brilliant ideas on what household items could be turned into a stunning lantern. The only problem is: This year Trude brought a guest! The little girl needs some crafts materials as well. And sharing is not the strong side of Trude’s flatmate. The result is a cold war between the lantern builders! Will Trude manage to re-establish peace on this special day?
This new episode of “Trude’s Flatmate” and five others will air in the mornings of Wednesday, Thursday and Friday this week. 8:30 am on German broadcaster KiKA.