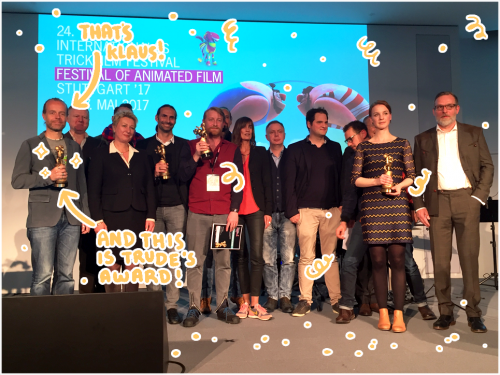 At last week’s International Trickfilm Festival in Stuttgart, “The Beauty and its Beast” from our TV series “Trude’s Flatmate” (Trudes Tier), directed by Klaus Morschheuser, has been awarded with the Tricks for Kids award in the category Best TV Series.

Congratulations to the team!  🏆✨

Trude’s flatmate has his big performance at this year’s ITFS, but he’s not alone! The episode “The beauty and his beast” from our TV series “Trude’s Flatmate” (Trude’s Tier) as well as the episode “Back on Track” from our TV series “Klump” (Petzi) are being screened at this year’s International Trickfilm Festival Stuttgart. Both episodes are running on Wednesday, 3rd of May at 2:30pm at Metropol 1 as well as on Saturday, 6th of May at 5:00pm at Gloria 1. Check it out if you’re there!

And make sure to give the team a hearty hug if you see them around. :) 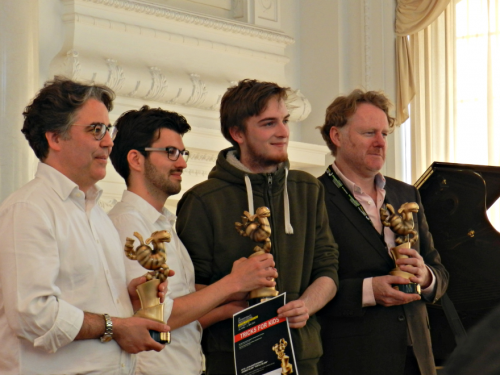 At this year’s Trickfilm Festival in Stuttgart our new tv series ‘Rasmus Klump’ (Petzi), was awarded with a Trickster award for the best tv series.

Director Michael Bohnenstingl and Producer Patrick Brennecke were there to accept the award on behalf of the studio.

We’re all quite happy! 🌠 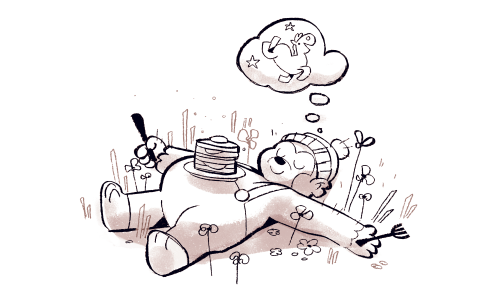 On this year’s International Trickfilm Festival Stuttgart Trude’s big furry flatmate meets a roly-poly adventurer and his friends: Rasmus Klump. While Trude and her friend are enjoying fireworks, Rasmus and his crew look for some big adventures on a deserted island.

If you would like to hear more about these two projects, there will be a studio presentation on Sunday at 2:00pm at Metropol 2.

After recently being shown on ‘Die Sendung mit der Maus’ on WDR, the latest episode of ‘Trude’s Tier’ will have its festival premiere at this year’s ITF in Stuttgart.
‘The Gift’ will be screened this Sunday at 5:00pm at the Metropol 1 cinema. Director Klaus and Trude’s voice Ruth Macke will attend the screening as well.
Feel free to pelt them with your questions after the screening. 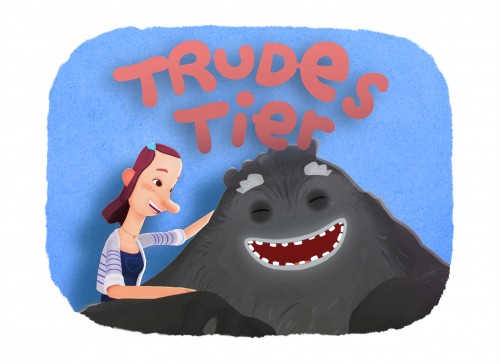 Trude lives together with a big obscure beast, which has the power of an elephant, the brashness of a child, but not a clue what’s good manners… ‘Trudes Tier’ (Trude’s Flatmate), directed by Klaus Morschheuser, Johannes Weiland and Michael Bohnenstingl and designed by Sandra Brandstätter and Sebastian Koch, is our latest tv-series project for the children’s tv show ‘Die Sendung mit der Maus’. The episodes will have their tv premiere on Das Erste / KIKA on 27th of April, 4th of May and 11th of May at 11:30 am.

If you attend this years ‘Internationales Trickfilmfestival Stuttgart’ (ITFS), you can have a look at some of our films as well: 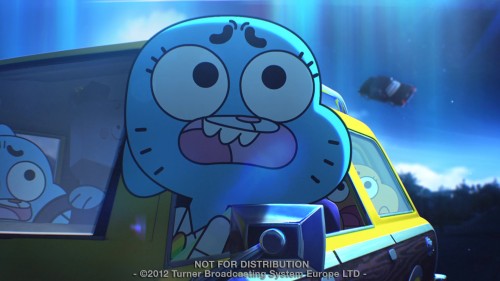